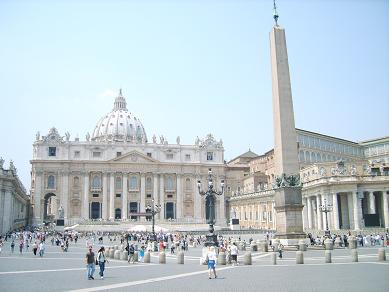 Vatican City is is the smallest independent country in the world and is the governmental capital of the Catholic Church. In 1929, under the premiership of Mussolini, the Vatican became officially an independent state. The size of the Vatican is about 44 hectares and about 932 citizens live inside. Besides St. Peter’s Square, the entire state is walled. The St Peter’s Basilica, erected over the tomb of St Peter the Apostle, is the largest religious building in the world. The Head of the Vatican is the Pope. The current Pope is Francis, born as Jorge Mario Bergoglio.

Taking a break at the Vatican Square in the shadow. Temperature in the summer can be higher than 35 Celcius degrees.

A full price ticket for the Vatican Museums and the Sistine Chapel is €16 (in 2015). Students and children 6-18 pay €8. From April 24 till July 31 and from September 4 till October 30 it’s possible to buy a night ticket (19.00-23.00 hours). The price is also €16. Online reservation fee is €4. In the past we waited 1.5 hour in the morning to get into the museum. It seems this has changed and that the waiting lines are shorter nowadays. Temperature in July/August is hot, it can be between 30-35 degrees Celcius. In the summer months the museum is closed June 29, August 14,15 and every Sunday. Exception is the last Sunday of every month: then there is free entrance from 9.00 to 12.30. The Vatican Museums have a separate entrance from Saint Peter’s Basilica. Metro stations ‘Cipro’ (line A) and ‘Ottaviano San Pietro’ (line A) are both near the museum.

Clothes regulations
To enter the St Peter’s Basilica, visitors must first pass a security control and behind it is a second control of your clothes. Long shorts or a skirt are allowed but must be ‘decent’. Not too short and certainly not transparent. Control in the Vatican Museum seems less strictly. During our visit we saw a woman inside with long hair wearing a sexy hot-pants. The large majority of the people however were dressed properly. The men had changed their shorts for long trousers.