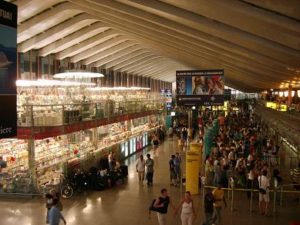 Termini Station is in the city centre and is the central station of Rome. The Leonardo Express train leaves every 30 minutes non-stop to Fiumicino / Leonardo Da Vinci Airport. A ticket for this airport train is €14. In the Atrium, passengers can buy train tickets at the ticket window. There is also a large bookshop (opposite the ticket windows, the area with the bright lights). Upstairs in the Atrium is a self-service restaurant. Behind the Atrium is the Central Gallery (220 meter) with shops, fast food restaurants and ticket machines. The Central Gallery gives access to the train platforms.

The main bus station is located in front of Terminal, at Piazza Cinquecento. From here leave many city buses such as:
– 40 Express: Termini station – Saint Peter’s (Vatican city)
– 64: Termini station – Saint Peter’s (Vatican city)
Most convenient is to use the metro from Termini Station. Main attractions as the Spanish Steps, Villa Borghese, Colosseum, Forum and the Vatican Museums have a metro station closeby. From the bus station operates the “110 Tourist Bus”. This bus is an open tour-bus with a jump on/ jump off system to all major attractions in Rome. The visitor can stop at any of those sights. A ticket is €20. However in Tripadvisor the bus didn’t get good reviews. The Ryanair/Terravision bus to Ciampino Airport stops in Via Giovanni Giolitti 38, a street along Termini train station.

Rome has 2 metro lines (lines A & B) which both have a stop at Termini. Access to the metro is one floor below, as well as outside, on Piazza dei Cinquecento. Line A runs east to west from Battistini to Anagnina. Line B runs northeast to southwest from Rebibbia to Laurentina and connects the 3 main train stations: Tiburtina, Termini and Ostiense.

is designed in an Art Deco style. Location is close to Central Station Termini. To the metro station is 300 meter. Hotel facilities include a roof terrace and free Wifi. More than 2250 reviews (8.5).